One of the most beloved cultural icons in history, Elvis Presley captured the hearts and minds of millions of fans throughout his dynamic career. Here are just a few facts that showcase how and why Elvis was such a beloved figure:

Elvis remains well-known, even today, for his distinctive sound, revolutionary music, controversial sensuality, and, of course, that iconic Elvis hair. As wig designers and creators with a special love for the King, we here at 3rd Dimension provide a glimpse back at a few of the looks that helped make Elvis into the recognizable figure that he remains today.

The King first appeared on the scene in 1954, brandishing his unique sound influenced by the music of his childhood: pop, country, gospel, and R&B. He also sported a signature hairstyle that many people still imitate today.

This style seems to fall into a class of its own, though people have many terms for it: pompadour, ducktail, rockabilly, and greaser are just a few. While some of these terms might be a bit of a misnomer, describing a range of styles, the look they are trying to describe is well-known, and it is a popular Elvis wig to find among impersonators.

The look itself was actually Elvis’ attempt to emulate the style of famed actor Tony Curtis, who the King admired. It was achieved by parting the hair on the side, then brushing the top portion of the hair to the opposite side The sides were then brushed straight back to meet evenly at the back of the head. The look was complete with longer sideburns. Hair cream was needed to keep the style in place.

While many fans adored this look, it was met with criticism from some popular names of the day. Ed Sullivan indicated a distaste for it in a newspaper article, in which he declared, “[Elvis’] hair is so high in front that it looks like a ski jump.”

The King’s hair changed out of necessity in 1958, when he was drafted into the Army. He served for two years in Germany, and, like all recruits, had to sport the military regulation hairstyle, short and close-cropped. The cutting of his hair was attended by dozens of photographers, who snapped away as Elvis’ signature style was shaved off.

In the 60’s, Elvis focused primarily on his movie career. His hairstyle was very similar to the look he sported throughout the ’50s, with some notable changes. While Elvis had always dyed his hair to be much darker than his natural mousy blond, Hollywood dyed it an even deeper black and got rid of the sideburns. This Elvis’ hair is immortalized in the more than 20 movies he starred in during that particular time period.

Few concert appearances occurred for the King in the 1960s, due to a combination of his focus on movies, his recording, and the British Invasion. However, he ultimately made a comeback to live performances in 1968 after 7 years away from the stage. His comeback television special aired on live TV and was followed by a long-term concert residency in Las Vegas. The 4-week engagement of 57 shows was completely sold out.

The 1960s also marks the introduction of Larry Geller’s influences – on that iconic Elvis hair, that is. The hair salon owner became Elvis’ personal stylist, with his full-time job being to manage that signature style at movies and concerts.

Geller continued styling Elvis’ hair throughout the ’70s, taking the King’s widely-recognized look and giving it a unique spin that was all his own. Elvis’ hair care routine was carefully planned, consisting of daily shampooing, scalp massages, hair brushing of 50 to 60 strokes, and a variety of products selected to keep the hair supple and healthy.

The look itself is one that many an Elvis wig attempts to capture: longer and swept back, with a rooster tail gracing the front of the forehead, and those mutton chop sideburns that have become a signature of 1970’s style.

Tragically, Elvis passed away in 1977, at the age of 42, as a result of the stress put on his body by his fast-paced lifestyle. It is a fact mourned by many fans who wonder what else he could have contributed if he had lived. 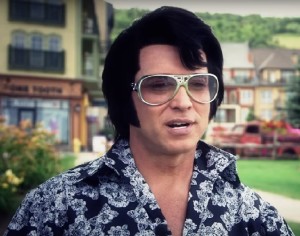 While Elvis may have passed on, the impression he left on music and pop culture remains today. Many people continue to pay tribute to him, and an entire community of Elvis impersonators and aficionados has popped up in his absence.

Being an Elvis tribute artist is often a difficult job – authenticity is key, from the smallest accessories to the proper costuming, as well as adopting the proper tone, voice, and mannerisms. Artists can spend years perfecting their acts.

One component that is vital to get right is, of course, the Elvis’ hair. A proper wig is usually a necessity, as capturing the King’s style can otherwise be difficult. Some anecdotes even suggest that Elvis’ own hair routine caused weakening of his hair follicles at certain points during his career, which can cause the hair to be frail and break.

This means that a wig is often an excellent choice, both for the health of the impersonator’s own hair and for an authentic look. At 3rd Dimension Studios, we specialize in Elvis tribute wigs and can capture the look and feel of the King from any era. If you are a tribute artist who wants to take your performance to the next level, contact us today to learn more about how we can design and create a wig that will enhance your entire performance.